Jamaica
Caribbean Economies in the time of Coronavirus

The COVID-19 shock will have significant implications for Jamaica’s economy, particularly for tourism and external financial flows including remittances.

The Coronavirus and Government Actions to Prevent Transmission

As of April 8, 2020, 63 cases of COVID-19 had been confirmed in Jamaica. Despite concerted efforts by the government to stem transmission of the virus from abroad, as well as domestic measures to slow transmission within the country, it is widely expected that more cases will be identified over the coming days and months.

The government has taken an active stance in responding to the crisis. This stance can be broken down into three general categories: (1) efforts at the border; (2) measures to stem transmission domestically; and (3) policies to mitigate the impact of the shock (both in terms of health services and economic stimulus for affected sectors).

Border measures: On March 16, 2020, the government advised that all travelers from countries where there is local transmission of COVID-19 would be required to self-quarantine for up to 14 days. On March 21, the government took a more proactive step by closing Jamaica’s air and seaports to incoming passenger traffic, though outgoing passengers and cargo would continue to be allowed.

Domestic measures: The government has mandated that any person displaying symptoms of the virus will be immediately isolated in facilities at a public hospital. On March 28, 2020, the government issued a public health emergency and imposed a curfew between 8 pm and 6 am through at least April 14. Only essential services have been permitted to remain open, and all other residents have been urged to stay indoors with the exception of necessary movements. Other measures include the deployment of additional isolation facilities for moderate cases, and enhanced public security measures.

While still in its early days, the COVID-19 shock will have significant implications for Jamaica’s economic performance in 2020 and beyond. Prior to the crisis, real GDP growth for FY2020/2021 was projected to be about 1.1 percent, set against the backdrop of expected strong domestic conditions and buoyant external demand for tourism and commodities (e.g., bauxite). The nature of the unfolding COVID-19 crisis is such that it is likely to affect a number of key sectors of Jamaica’s economy. First among these is the tourism sector, which accounts for a very large share of both total economic output and employment (34 percent and 31 percent, respectively) (Table 1)—Jamaica ranks 16th globally in terms of countries’ economic dependence on the sector (Figure 1). Tourism receipts also account for about 53 percent of total exports, or the equivalent of some 20 percent of GDP. Of the 4.3 million tourist arrivals in 2017, about 43 percent were from cruise ships—the sector most directly and profoundly affected by the crisis. In addition, a large proportion of tourism arrivals to Jamaica originate from the United States, Canada, the United Kingdom, and other European countries—all of which have been hard hit by the crisis, forcing them to invoke unprecedented travel restrictions. In this context, this crisis and its implications for Jamaica’s most significant economic sector are without historical precedent. Given the weight of the sector, our simulations suggest that a prolonged crisis could reduce output relative to pre-crisis expectations by an appreciable magnitude.1 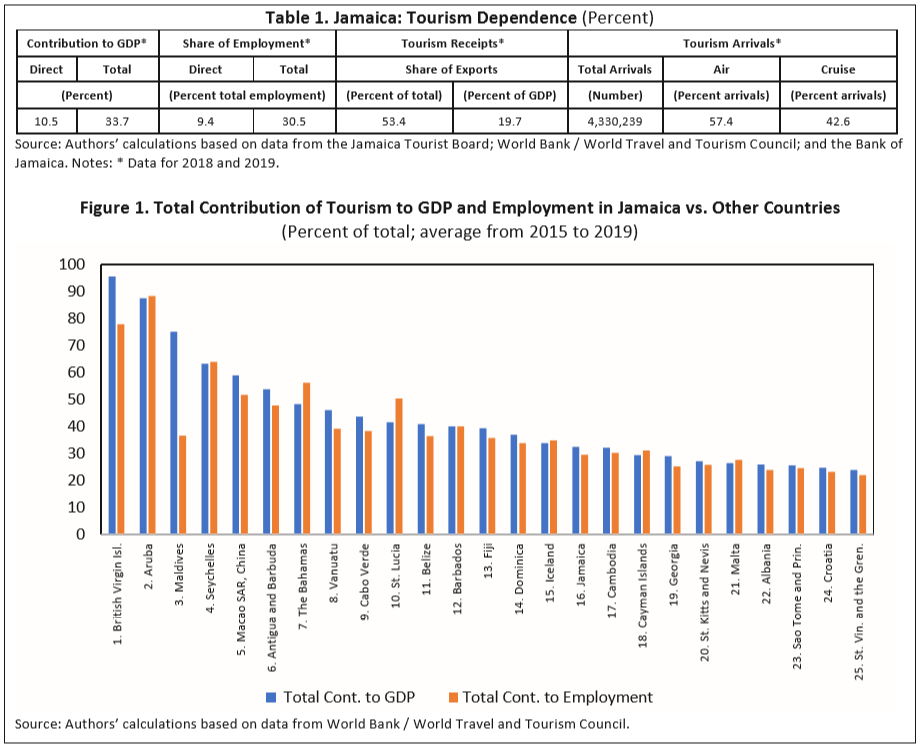 Other shock transmission channels will also affect Jamaica’s economy. Beyond tourism, Jamaica’s economy is likely to be adversely affected by shocks to trade and financial flows, as well as the costs associated with mitigation efforts at home (e.g., forced closures of businesses). Revenue implications of shuttered businesses and sectors, as well as costs associated with mitigation efforts, will also have adverse implications for budgetary outcomes, forcing the government to run higher deficits than originally expected. This may also require higher levels of domestic and external financing, with potential implications for the medium-term public debt reduction target set out under the fiscal responsibility law (i.e., a public debt-to-GDP ratio of less than 60 percent by 2026).

Other potential implications of the crisis relate to external financing, the availability of foreign exchange, and the balance of payments. Successful debt reduction and macroeconomic stabilization efforts in recent years have helped reduce Jamaica’s external imbalances, with the current account deficit falling from about -10 percent of GDP as recently as 2012, to about -3 percent in 2019. While this has helped support exchange rate stability and allowed the central bank to build strong reserves buffers, Jamaica remains highly dependent on private capital transfers from abroad in the form of migrant remittances. These remittances accounted for about 16 percent of GDP in 2018, which is the equivalent of three times the volume of foreign direct investment (FDI) from abroad, twice the magnitude of external debt service requirements, and equal to about 41 percent of the value of total exports (Figure 2). Migrant remittances also serve as an important source of income for the most vulnerable populations. In this context, there is a significant risk that the shock to employment in advanced economies that are the main sources of Jamaica’s remittances—the United States, Canada, and United Kingdom—could adversely affect these flows, which could weaken the balance of payments position, put downward pressure on the exchange rate, and have serious implications for poorer and more vulnerable citizens who depend on these funds as a key source of income. 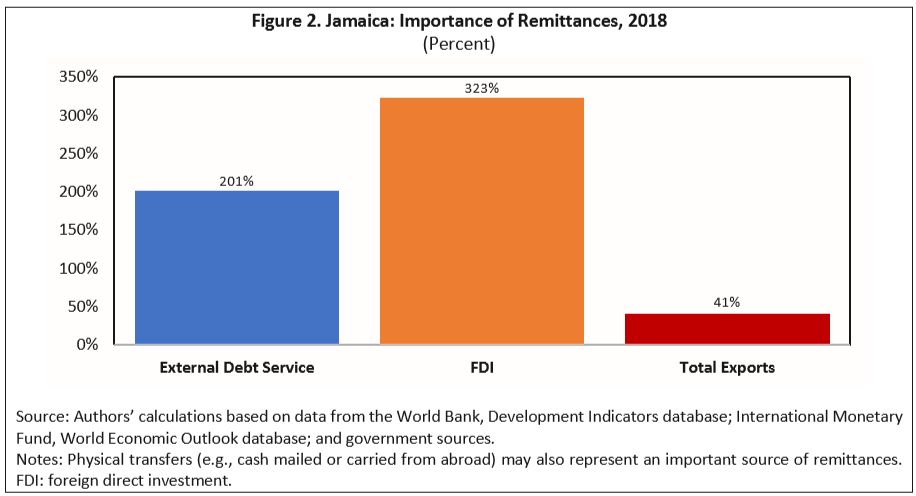 The Bank of Jamaica and the government of Jamaica have undertaken a number of economic measures to dampen the impact of the crisis on key sectors. These measures continue to evolve in light of developments, and so far have included a broad spectrum of fiscal, financial, and other measures aimed at supporting the key sectors most directly affected. Key actions announced thus far include (1) broadbased tax cuts and related subsidies; (2) financing and grant facilities to support the most affected sectors (both businesses and persons); and (3) the suspension of import taxes for critical medical and other supplies. With respect to monetary policy, the central bank has chosen to maintain its policy rate at the pre-crisis level of 0.5 percent, and to focus instead on measures aimed at supporting domestic financial institutions, including the relaxation of rules regarding both the volume of liquidity that can be provided by the central bank (e.g., via the discount window and short-term repo facilities) and the types of assets that can be used as collateral for related transactions. Both the central government and the central bank have stated that they will continue to adapt their policy response to evolving conditions, making it likely that more stimulus and support measures will be undertaken before the crisis dissipates.

1 For a broader discussion of potential implications of the crisis for the region, see: https://blogs.iadb.org/caribbean-dev-trends/en/covid-19-tourism-based-shock-scenarios-for-caribbean-countries/ 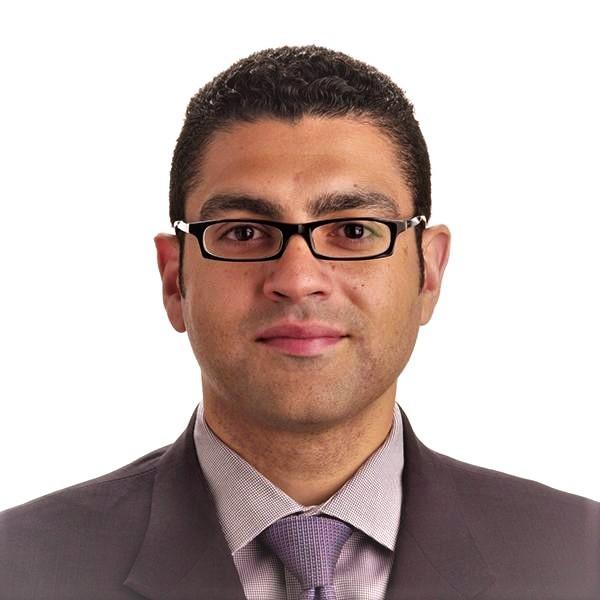 Henry Mooney serves as Economics Advisor with the IDB’s Caribbean Department, and was formerly the Bank's Lead Economist based in Jamaica.